The Worst Thing I Read Today, Or Adventures In Slut-Shaming 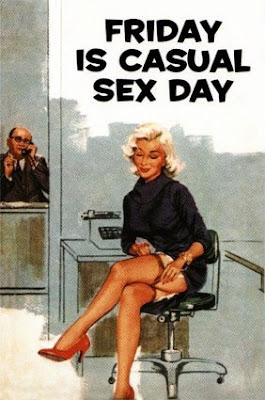 Well if this isn't the worst piece of slut-shaming garbage I have ever read, it's at least a close second. Possibly to this other really terrible thing Mark Regnerus wrote. Today he asserts the following:

When attractive women will still bed you, life for young men, even those who are floundering, just isn't so bad. This isn't to say that all men direct the course of their relationships. Plenty don't. But what many young men wish for—access to sex without too many complications or commitments—carries the day. If women were more fully in charge of how their relationships transpired, we'd be seeing, on average, more impressive wooing efforts, longer relationships, fewer premarital sexual partners, shorter cohabitations, and more marrying going on. Instead, according to the National Longitudinal Study of Adolescent Health (which collects data well into adulthood), none of these things is occurring. Not one. The terms of contemporary sexual relationships favor men and what they want in relationships, not just despite the fact that what they have to offer has diminished, but in part because of it. And it's all thanks to supply and demand.

To better understand what's going on, it's worth a crash course in "sexual economics," an approach best articulated by social psychologists Roy Baumeister and Kathleen Vohs. As Baumeister, Vohs, and others have repeatedly shown, on average, men want sex more than women do. Call it sexist, call it whatever you want—the evidence shows it's true. In one frequently cited study, attractive young researchers separately approached opposite-sex strangers on Florida State University's campus and proposed casual sex. Three-quarters of the men were game, but not one woman said yes. I know: Women love sex too. But research like this consistently demonstrates that men have a greater and far less discriminating appetite for it. As Baumeister and Vohs note, sex in consensual relationships therefore commences only when women decide it does.

So aside from the fact that there are probably very good reasons why women approached by a stranger, even an attractive one, Regnerus also makes the extremely original point that boys will be boys! And he also repeats the idea that women don't actually want sex, they just go along with it. Ugh.

Regnerus also cites the work of the really awful Catherine Hakim, who, as I explained once before, is at the UK equivalent of the Heritage Foundation. So that pretty much destroys his credibility right there.

Let's for a moment remember that Regnerus believes it's a huge problem people aren't getting married until later in life. Instead, as I've noted many times, this is merely what happens when we as a country get richer, weddings get more expensive, and more people are focused on establishing their careers first (thanks, in part, to the United States' pretty atrocious work/life balance).

So, when people delay marriage, they might engage in some casual sex or temporarily monogamous relationships to fill the sexual needs in that gap. It might seem inconceivable to Regnerus that women might want to engage in that, but believe it or not, it happens! But Regnerus asserts that that never happens, so therefore if you're a woman who has casual sex, you're just giving in to men who want sex. You slut.

This doesn't mean that men "hold all the power," it just means that men are willing to say yes more. There are a lot of factors that go into whether women decide to engage in casual sex, and let's not forget that personal safety might be among them. This might be just one reason why women are more willing to be up for casual sex less than men. Others? Slut-shaming, double standards, and the fact that there are a lot of undesirable sexual partners out there. Those are just a few. But I do not believe, as Regnerus does, that the fact that young people engage in casual sex is some kind of crisis. What is a crisis is access to safe and affordable sexual health care.

Geez, Slate, try not to assign articles to someone so terrible next time.