Pew Research finds that, among Millennials, 52 percent say being a good parent is "one of the most important things" in life, while only 30 percent said the same of having a good marriage. Here's a helpful graph: 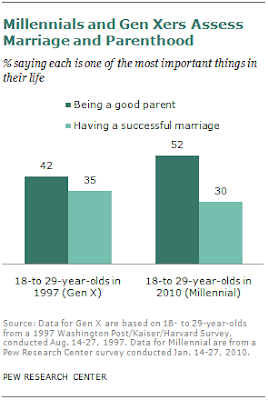 It's worth noting that Millennials seem to have a more positive outlook on good parenting than Gen Xers do, but as I've written before, marriage rates for young people are falling. People are getting married later in life. Getting married young just isn't as important to this generation. Jill Filipovic at Feministe has some good reasons for this (hint: It's not that men are emotional infants).
In fact, this later part of the Pew article is important to look at:

Millennials aren't opposed to marriage and look forward to having kids. They don't, however, think the two go hand-in-hand. I think much of this has to do with the fact that Millennials are of a generation that doesn't find divorce strange. I knew tons of people growing up whose parents were divorced, and though it certainly still drew judgmental whispers, it certainly was a normal part of life.
Perhaps as divorce seems less scary, Millennials are beginning to examine life in a slightly different way: You can -- and should -- still be a good parent even if your marriage doesn't work out. And if it doesn't work out, that's OK. Plenty of people are happier out of their bad marriages. That's not to say that striving for a good relationship isn't a good goal, but fewer Millennials see it so tightly tied with parenthood:

About a third of Millennials (34%) think that more unmarried couples raising children is a bad thing for society, compared with 45% of those ages 30 and older.

Oddly, though, Millennials, like the rest of society, still think that single mothers are bad news. Over 60 percent disapproved of single motherhood. That's less than those in the 30-and-over category, who disapprove at a rate of just over 70 percent.
I'm sure this round of polling will bait lengthly blog posts about how selfish young people these days are -- that they're turning from marriage and making huge mistakes in their lives. But I don't necessarily think it's a bad thing that Millennials view marriage and children as separate endeavors. They are, after all, two very different things.
Posted by Kay Steiger at 5:15 PM