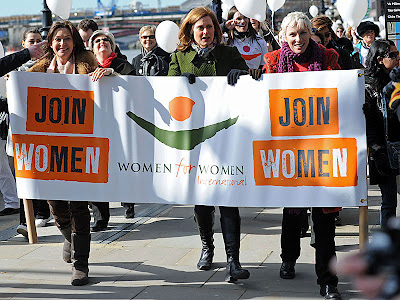 Today is International Women's Day—the 100th such one, in fact. There are two things that strike me about this day. First, that women around the world are in a much, much better place than they were 100 years ago. The second is that women have a long way to go in terms of gender equality, feminism, gender justice—whatever you want to call it.
After all, women are still making leaps and bounds in breaking into predominately male industries and challenging what's "masculine" and "feminine" all the time. But despite all that, women still routinely make less than their male peers, women are the minority of political leaders, and women are still the minority voice among opinion makers. Not to mention some of the really horrendous human rights violations that are happening against women throughout the world.
It gets really exhausting for the women who fight to correct these injustices day after day. And that is, perhaps, why the lie that we don't "need" feminism anymore or that we've already reached gender equality. It's much easier to accept that where we are is the best we'll ever get than it is to correct these problems.
The world is a really bad place sometimes, but it is especially a bad place for a lot of women around the world. That, I think, is the takeaway is from a day like today. We should never forget that, and we should keep fighting for what women deserve: equality.
Posted by Kay Steiger at 2:54 PM