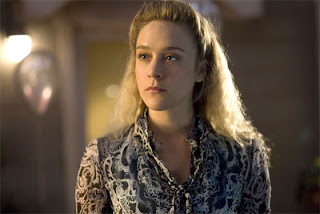 I have to agree with Stanley Fish on this one. If you haven't been watching Big Love this season, you should be. If you haven't seen it before, get the DVDs in your Netflix queue immediately.

While at first the early episodes of Big Love were targeted at humanizing polygamists, showing that in their own weird, fucked up way, they were a family that loved each other very much. They looked out for each other. They protected one another. (Spoilers to follow.)

This season, that meme has been turned on its head. Slowly, the Henrickson family is falling apart. This high-drama series has steered away from the mafia-esque themes in the last season and has begun focusing on the internal fissures within the family. Earlier in the season, an attempt to add a fourth wife crashed and burned. Members of the family are diverging from their firmly held conservative beliefs.

Nicki has emerged as one of the most fascinating characters this season. She is both fiercely loyal to her biological mother and resistant to the manipulations of her father, a character eerily modeled after Warren Jeffs, while still helping him to be acquitted of charges of statutory rape. Meanwhile, she's lying to her husband and sister wives about trying to get pregnant -- she is secretly taking birth control. Just a few episodes ago, Nicki's sister wives escorted her to a fertility doctor to see why she hadn't been conceiving. While in the room with the doctor, Nicki asked for another birth control prescription.

One of the scariest things about the last episode that I just watched last night was when the family discovered that Nicki was intentionally trying to avoid pregnancy. In a terrifying moment, her husband, Bill, orders her to stop taking the pills immediately. He accuses her of defying her heavenly duty by not wanting to bear children.

The episode also showed the trials of the eldest daughter, who is pregnant. In a moment of great irony, Barb accuses her daughter of taking birth control pills. If only Sarah had been taking birth control, she wouldn't be faced with the difficult situation of what to do with her pregnancy. At the end of the episode, she miscarries. (A plot twist I find a little too convenient.)

The reason the character of Nicki is so fascinating is because she has grown up on the fundamentalist compound. She still remains close ties to her family there, and she often guilts her own family when they are going against the "principle." She knows the rules of polygamy and believes in them -- but she still resists having more children. The last episode reveals it may be because she doesn't necessarily feel attracted to her husband. She's even been toying with the notion of an affair with her boss. And this family is supposed to represent the "normal" polygamists.

The problem here is a question of autonomy. These are battles that we like to think we've already fought and tucked away long ago, but some women are still living out the battles of control over their reproductive lives. The character Nicki is lucky -- although she had to lie to her husband, she still had the ability to obtain a prescription for birth control. There are women that are in a similar position where they don't want more children, but don't have as easy of access to birth control.
Posted by Kay Steiger at 11:51 AM