American Women Need More Than Advice to 'Be More Dutch' 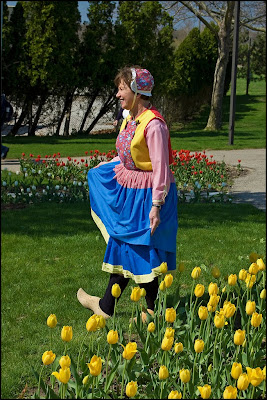 Jessica Olien over at Slate has been in the Netherlands for three months. After carefully studying some statistics, she has decided that feminists had it all wrong, and that we should give up on feminism and just be Dutch.

Though the Netherlands is consistently ranked in the top five countries for women, less than 10 percent of women here are employed full-time. And they like it this way. Incentives to nudge women into full-time work have consistently failed. Less than 4 percent of women wish they had more working hours or increased responsibility in the workplace, and most refuse extended hours even when the opportunity for advancement arises. Some women cite the high cost of child care as a major factor in their shorter hours, but 62 percent of women working part time in the Netherlands don't have young children in the house, and mothers rarely increase their working hours even when their children leave home.

It's hard not to wonder: Have we gotten it all wrong? In the United States, the race for equality has gone mostly in one direction. Women want to shatter the glass ceiling, reach the top spots in the hierarchy, and earn the same respect and salaries as men do. But perhaps this situation is setting us up for a world in which none of us is having any fun. After all, studies of female happiness in the U.S. find that even as our options have increased and we have become financially more independent than in any previous time in our history, American women as a whole are not getting any happier. If anything, the studies show that we are emotionally less well-off than we were before. Wasn't the whole point of the fight for equality in the workplace to improve our wellbeing?

The rest of her article goes on to speculate that American women are getting pushed to work more and achieve more while Dutch women seem to work less and be happier. While that might be true in the strictest interpretation of the data Olien presented there's a lot she's missing here.

First, though women in the Netherlands may "work less" than their American counterparts, she tends to gloss over the fact that the Dutch have a lot of policies that are helpful to women. In fact, the Netherlands has so many policies that help women out that its often the subject of study when it comes to family-friendly policies.
The chief reason full-time employment is the holy grail in America is that it's usually tied to health insurance. Not only does the Netherlands offers the best version of what American health care reform tried to do: Offer affordable health insurance but force everyone to buy into the system. Add on top of that generous child care subsidies, lengthly vacation time, and flexible working hours. If American women had these options in a way that wasn't tied to employment, there might not be such a rush for full-time employment here -- among women AND men. Granted, as Olien hints, the policies aren't perfect in the Netherlands, but they are leagues ahead of what's offered by the U.S. government. And, as Yglesias points out, while Dutch women do less work than their American counterparts, so do Dutch men.
Olien also doesn't acknowledge that America and the Netherlands are different in terms of demographics. Not only is there more disagreement about what the government owes women politically here, but this country is also much economically and demographically diverse than the Netherlands. A full 79.9 percent of the Netherlands is made up of ethnic Dutch (whites), while America is made up of 64 percent non-Hispanic white. The United states has a lot more people that are relatively poor -- this graph shows that while the Netherlands has only 8.1 percent of the population below the median income, in America it's 17 percent.
Perhaps it's poverty that's getting American women down, since recent studies show that among mothers especially poverty correlates highly with depression. Not to mention that depression treatments are less effective if you're poor and that you're more at risk for depression in the first place if you fall into a low socioeconomic class.
Fundamentally, Olien looks at the Dutch system and concludes that happiness and equality are inherently separate endeavors. But American feminists don't combat the pay gap because they think American women are unhappy. They do it because on average in America, if you're a white man, you will make more than everyone else, and that's fundamentally unfair. The gender essentialism in Olien's piece -- that all women are pressured to climb the corporate ladder but secretly want to pursue hobbies isn't even anecdotally true. I know lots of women that thrive on the high of a workaholic career drive and lots of women whose priorities lie more with their families. Women should have both the option to achieve highly in their careers and to stay at home to support families: Just like men do.
But for the vast majority of women who work in America, they do so not because it's a choice but because it's what they have to do to make ends meet. Setting up the difference between Dutch women and American women as simply choosing to work less isn't right.
I will give Olien credit for correctly identifying a phenomenon that is prevalent in America, perhaps best expressed by Courtney Martin, "We are the daughters of feminists who said, 'You can be anything' and we heard 'You have to be everything.'" But while this is a problem in America, it's often a problem most heavily complained about among the white, middle-class and upper-middle class woman who sighs at having to "do it all." That pressure is real, sure, but many women don't have the luxury to complain about it. Unfortunately too many women in America are just struggling to survive, pay their health insurance, and struggling to figure out what to do with no child care and no sick leave.
So forgive me if I can't muster the energy to sympathize with Olien in her campaign to make American women "more Dutch."
Posted by Kay Steiger at 1:39 PM

Speaking as the grandson of a full-blooded Dutch guy, I think the whole conversation has also left out the fact that while Dutch society is liberal, it's also quite patriarchal. Women are *able* to participate in the economy with (relatively) little overt hassle, but the norms associated with being the breadwinner are still thoroughly sexist.

One could make a paradox-of-choice argument for why this equates to more happiness for Dutch women, but that's the rare paternalist argument that I want no part of.

Tom, you're totally right. While many people look at progressive policies, they often forget that such societies can still have sexism. Thanks for reminding me of that and pointing it out.