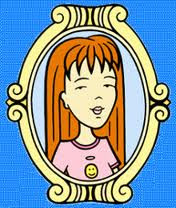 Now that Daria is out on DVD, I bought it and have been working my way though it. Several episodes helped me get through a pretty devastating sickness earlier this week. Let me just say that I loved watching Daria marathons on MTV when I was growing up. The show's sharp social commentary picks at stereotypes prevalent in the 1990s. Granted, the show still perpetuates some stereotypes of its own, but watching it again, it has held up remarkably well over time.

I recently watched "Monster," an episode in season 2 of the show in which Daria and Jane follow Daria's sister Quinn around with a video camera for a class project. Quinn is supposed to be the ultimate stereotype of a pretty and popular high school girl that everyone hates -- that is, unless you were the pretty and popular girl in high school. She's presented as the opposite of the main character Daria, a smart and cynical teenager that provides entertaining sarcastic commentary but is definitely on the social periphery.

But these days, I began to see Quinn a little differently. In many ways, Quinn is an early version of a stereotype we've become intimately familiar with in the past decade: Girls that are under incredible pressure to be perfect. "Monster" reveals Quinn breaking down when discussing her pores -- "My pores are tiny!" she screams. "Stop zooming!" (Oh to think how this might have played out in the era of HD.) The breakdown reveals how much work her seemingly effortless perfection is for her.

Quinn also makes a speech near the end of "Monster" that reveals Quinn has given some thought to her position in the high school social class. I didn't transcribe the speech in full, but the gist of it is that everyone needs to be "good at something" and the something that Quinn is good at is being "attractive and popular." This is remarkably self-aware. She seems to have chosen to throw her effort into what she perceives to be her talent, even if it might be a shallow one.

What's interesting about this is that while Quinn views her her chief job in life is being "attractive and popular" it seems that her interaction with boys isn't anything beyond status. Though Quinn talks nearly constantly about boys, it's almost always as a way of collecting status symbols. She debates whether she wants a boyfriend whose parents have a beach house or a boyfriend whose parents have a ski cottage. Quinn often outright forgets the name of whatever boy has driven her somewhere because to her, they're interchangeable.

Quinn might spend much effort on her beauty, but the fact that she is attractive to the opposite sex is only relevant for what ride she can leverage or other perk she can get from a boy. In many ways, Quinn turns the notion of the revolving door that's usually reserved for girlfriends of the main male character on its head. To her it is the boys that revolve through her life interchangeably and the girls who are members of the fashion club are both her friends and her competition. In Quinn's life, it's the girls that matter the most.

This might be obnoxious, but in many ways, it's also remarkable that she can so adeptly identify how to leverage the power of her appearance. For Quinn, beauty is a form of power -- just so long as she can withstand the pressure.
Posted by Kay Steiger at 12:19 PM