Before Roe v. Wade -- And After 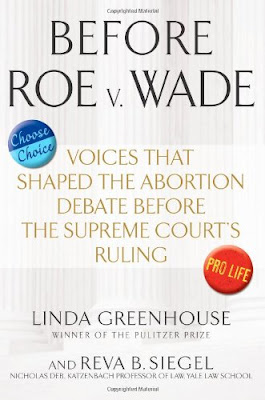 Over the very long break (sorry about the sudden dropoff in blog posts), I got a chance to finally finish a very good book that provides some key context to the abortion debate, Before Roe v. Wade: Voices that Shaped the Abortion Debate Before the Supreme Court's Ruling

by Linda Greenhouse and Reva Siegel. Because I am one of those young feminists who has lived my entire life after the Roe v. Wade ruling, I have been interested in how the debate was framed before the historic case.

The book is largely a collection of reprints of speeches, pamphlets, laws, testimonies, and other information that was produced in the early 1960s and '70s. The nature of the book doesn't allow for much of a comprehensive narrative like many other modern nonfiction books, but the information contained in this collection is fascinating, no matter the side of the abortion debate on which you sit.

There were many things that surprised me in this book, including that the phrase "abortion on demand," something that has largely been used by the anti-choice movement to talk about how women are using abortion for selfish reasons, was originally used by activists pushing for the repeal of abortion bans. This was largely because some states had passed laws that allowed abortion to be legal for medical reasons and medical reasons only. This meant that a woman had to convince a doctor that a pregnancy was a threat to her mental or physical health. Such laws were obviously objectionable because the power to decide to perform an abortion fell on the doctor or other medical professionals and not on the women themselves.

The book also includes several of the amici curiae briefs filed for both sides arguing before the Supreme Court on Roe v. Wade. One brief was filed by three groups jointly: New Women Lawyers, Women's Health an d Abortion Project, Inc., and the National Abortion Action Coalition. This brief argued not just that abortion laws violated the equal protection clause of the Fourteenth Amendment (which puts the modern day protests against the Fourteenth Amendment in a new context in terms of abortion laws), but also argued that abortion laws violate the Eighth Amendment, which protects against "cruel and unusual punishment."

Forcing a woman to bear a child against her will is indeed a form of punishment, a result of society's ambivalent attitude towards female sexuality. The existence of the sexual "double standard" has created the social response that when a woman becomes pregnant accidentally, she must be "punished" for her transgression, particularly if she is single. This punishment falls solely on women: she must face the physical burdens of and emotional strains of an unwanted pregnancy, the degrading experience of having an illegal abortion "often in filthy motel rooms at the mercy of quacks who are charging exorbitant fees," and if unable to get an abortion, the responsibilities and trauma involved in raising an unwanted child. The man equally responsible for the pregnancy faces no such punishment ...

The Eighth Amendment to the United States Constitution protects all persons against the infliction of "cruel and unusual punishment." Amici contend that the expanding constitutional concern, as expressed by this Court, with practices which "offend the dignity of man," are contrary to "the evolving standards of decency that mark the progress of a maturing society" and punishment "disproportionate to the offense committed" as violate of the Eighth Amendment necessitates a finding that laws restricting abortion are unconstitutional ....

Now, of course, we know that much of the argument in the Supreme Court's majority opinion that overturned abortion bans based on privacy afforded under the due process clause of the Fourteenth Amendment (although Ruth Bader Ginsburg generally still argues in favor of equal protection on gender-related cases). But the book is instructive in noting the varying paths the Court might have taken. Unsurprisingly, the briefs on the other side of the issue argue in favor of right to life for the unborn, an argument they still use today.

Perhaps, though, what I found most remarkable about Before Roe v. Wade is something that seems all too familiar today. Back before Roe, there were two major problems: First that states had inconsistent abortion laws. Some banned it all together; others had far more liberal policies. The patchwork of access to abortion in the states is one that's strongly replicated today. Some states, like Oklahoma and Nebraska, are passing laws regularly to infringe on abortion access, eventually hoping to challenge Roe eventually in the Supreme Court.

The second idea that activists fought for was the notion that poor women had unequal access to abortion. Rich women, the activists argued, could afford to travel to other states or countries where abortion laws were more liberal. Indeed, the book includes a detailed pamphlet from the Society for Humane Abortion that detailed exactly how to fly to Japan to obtain an abortion -- from how much cab fare you might need to which flights were non-stop to and from Hawaii daily -- something that few poor women could afford. But thanks to the Hyde Amendment, a restriction on using federal money for abortion, poor women still have unequal access to abortion since it isn't covered by Medicaid. This notion of unequal access is something that my colleague Jessica Arons and her co-author Madina Agénor detailed in their recent piece for the Center for American Progress.

The arguments from the pre-Roe world still have echoes today. In some ways, passages of Before Roe v. Wade sound uncomfortably familiar.