On Gender Parity in the New Yorker 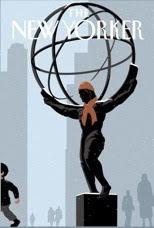 Edith Zimmerman does the blogger equivalent of rolling her eyes at this open letter to the editors of the New Yorker that complained the last two issues didn't contain enough content from women.

Does this bother you? This doesn't bother me. If you like a magazine, read it; if you don't, don't. Also, if you're mad at a magazine, sounding like a total drag can't be the best way to get what you want (which is, apparently, a refund for that specific issue or a back issue with more women writers). Pick your battles, etc.

Now, I mostly love Zimmerman so I hate to call her out, but I couldn't disagree more with this approach. You know what I bet would happen if enraged feminists just stopped buying magazines that didn't have gender parity in its bylines? Nothing! I'm almost 100% certain the New Yorker will continue publishing! And probably also continue to publish not a whole lot of stuff from women!

I completely understand the frustration with women constantly complaining about byline parity. It's totally annoying. But you know what's also annoying? The fact that men disproportionately get bylines in an ever-shrinking number of magazine pages.

There are definitely alternatives to the letter to the editor approach. You could be positive and praise magazines that do a good job of gender parity in their bylines. You could write in praising the work of the women that are published in that magazine. You could even -- pitch the magazine if you happen to be a journalist (since the disproportionate number of pitches to magazines come from men, says just about every editor in the universe). There are tons of ways to approach this problem that don't include just complaining about it in an obnoxious letter -- especially if you are from Massachusetts.

But I think Edith's approach of just not buying the magazine is a bit too much like the "just don't vote if politics pisses you off" line of thinking. Which is the kind of thing that makes me want to bang my head against the wall.

What is often effective is calling attention to the problem in some way, even if you have to be really nice in your tone. Then editors of the New Yorker, liberal media elites that they are, will get really embarrassed. And then they might possibly do something about the problem. Or maybe not. But at least they had to think about it for five minutes while they read your letter.

Update: Jenna Sauers at Jezebel has a good breakdown the dismal gender ratio at other major magazines.
Posted by Kay Steiger at 12:10 PM