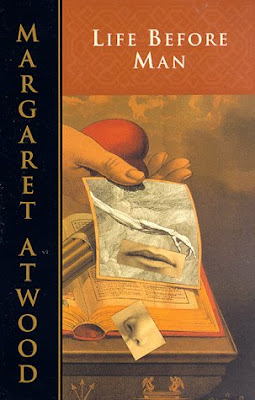 , which is about the end of a marriage in the 1970s (the book was first published in 1979). Though the book has nothing to do with the Ryan Gosling/Michelle Williams film Blue Valentine, I can't help but make the comparison since they've coincided in my media consumption.
While Blue Valentine certainly tried to be "real" about the end of a relationship, there are ways that a film is limiting. For one, the fact that the film tries to condense enough significant scenes into a two-hour film is challenging. Many relationships that crumble do so over the span of months or, most often, years.
This is where Life Before Man has the depiction Blue Valentine tried to create beat. The book covers the four main people in a relationship: the husband, Nate; the wife, Elizabeth; the mistress, Lesje; and the man the mistress leaves for the husband, William. In Life Before Man, no one is innocent, but no one is exactly a villain, either. Both Nate and Elizabeth are unfaithful to each other, but they approach their infidelity in a way a way that is both mature and destructive.
Like the characters in Blue Valentine, they feel an obligation to make the relationship work on some level for the children. But Life Before Man takes the complexity to a higher level. The characters are sometimes selfish, often tortured, and always elegantly written. Perhaps the character that's depicted as the most selfish and vengeful, Elizabeth, is not entirely unsympathetic. After all, she's trapped in an unhappy marriage and is suffering from the loss of a former lover. She also faces extreme pressure to be a good mother, an accomplished employee, and a woman in her late 30s who is still desirable. She is certainly not perfect and not always likable, but I think that might be why I like her so much.
In any case, it's an excellent book and I highly recommend reading it.
Posted by Kay Steiger at 3:25 PM