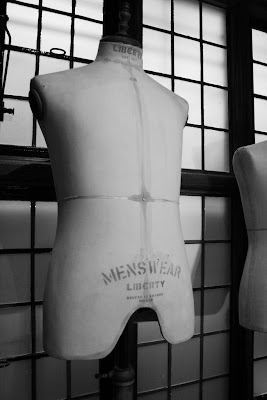 (Flickr/Chris_J)
Today the Wall Street Journal has some advice on what women can learn about dressing well. The solution, it seems, is to "shop like a man." The piece itself offers some advice on looking for quality and comfort over labels and style -- something that my mother who sewed many of her own clothes over the years would likely raise her eyebrows at the idea that these are "masculine" qualities.
See, there's a problem with the "like a man" genre of article -- and there's no shortage of them. Women are frequently told to ask for a raise like a man, Date Like a Man

, and even pee like a man. But the problem here is that "like a man" is often synonymous with "do it better." When women are given advice on asking for raises "like a man" it's because women are often paid less than men, and it's often thought that the solution is to simply mimic men's behaviors to receive the best results. Same goes for dating and peeing -- the idea is that men somehow do it better. The way to fix that seems to be to tell women how to be more like men.
There's a reason there isn't a genre of "like a woman" articles for men. (Except for this Daily Fail Mail article on a man who spent a week "living like a woman.") See, the idea is that men would never want to be "like a woman" because women are generally considered inferior, even though if you replace "like a woman" with "better," you could write articles on how men should drive like a woman, how to multitask like a woman, or how to fly a fighter jet like a woman.
But you don't see articles like that -- or at least, not nearly to the frequency with which you see "like a man" articles.
In the case of the WSJ article, it was talking about ways that men and women's clothing industries differ. But while women's clothing is often made, marketed, and sold in ways that are different than men's clothing, it's a shame to write the article in a way that assumes all women go for more cheap clothing over men, who buy fewer quality pieces. After all, there are plenty of women who don't like to buy shirts with mismatched stripes, spend time looking at quality over labels, and refuse to buy fabrics that aren't comfortable. Let's stop with the gender essentialism.
Posted by Kay Steiger at 1:44 PM

I'm bringing this to my Freshman composition course today to fill out the discussion on Gender Issues.

That's great! I hope it encourages some interesting discussion.