On the Shooting of Rep. Gabrielle Giffords and Violent Political Rhetoric 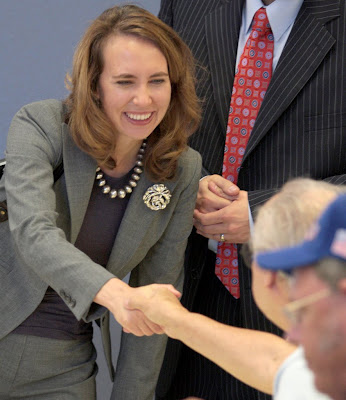 (Flickr/kevin.asher)
As the country tries to digest the violent shooting of Rep. Gabrielle Giffords (D-Ariz.) that left six dead and 14 others wounded, the language around political discourse has come under scrutiny. Giffords is believed to be the first female American politician that has undergone an assassination attempt. Giffords is still in critical condition as of this writing.
Victims in the shooting included Judge John Roll, a 63-year-old state appeals court judge who had recently received death threats for a ruling that found ranchers holding people at gunpoint upon crossing the boarder were acting illegally, and Christina-Taylor Green, a 9-year-old girl who was born on 9/11 and already showed promise as a potential leader since she was recently elected president of her class. The alleged shooter, Jared L. Loughner, is in custody and faces federal charges for an assassination attempt.
Shortly after news of the shooting broke, material from Sarah Palin's PAC revealed Giffords had been one of the electoral "targets," and the campaign materials used gun sights as imagery. Jessica Valenti published a piece in The Guardian that notes that Palin's PAC may have used such imagery thanks to a surge of "man up" rhetoric in politics recently:

In a country that sees masculinity – especially violent masculinity – as the ideal, it's no wonder that this type of language resonates. But it's a sad state of affairs when women in politics have to resort to using the same gendered stereotypes that kept all women out of public service for so long.

Discussions following the violent shooting on Saturday left those on the right reiterating that there was no connection between violent rhetoric and the actions of one mentally ill individual (Jill did a great job of explaining why simply blaming mental illness is bad). Those on the left insisted that violent rhetoric put forth by the Tea Party and others is creating a culture that deranged individuals might tap into.
This reminds me, oddly of the debate that came after the fatal shooting of Dr. George Tiller, a late-term abortion provider in Kansas who was shot to death in his church by Scott Roeder. Many of Tiller's colleagues noted the sustained and repeated harassment they and Tiller received over the years. Tiller's name was a rallying cry for the anti-choice right. Many were shocked that those on the right claimed that their often violent rhetoric toward Tiller wasn't connected to Roeder's actions.
The causes of violence are complex. The truth is we really don't know what makes someone attempt violence of this nature on another person. I'm not ready to blame Palin or others on the right personally, especially as details of the shooting are still getting sorted out. But would it hurt to make our political rhetoric more civilized and less violent? Definitely not.
Posted by Kay Steiger at 10:19 AM