'The Kids Are All Right' and Missed Opportunities 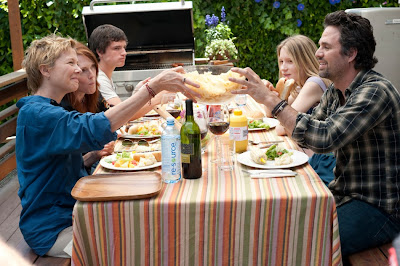 It seems the Oscar nominations are out today. I've seen seven of the 10 nominees thus far, including The Kids Are All Right, which I had a chance to finally watch last night. (No spoilers except what you've seen in the trailer.)

I was ultimately disappointed by this film, which is I suppose what happens when you see a film that's been hyped for as Oscar-bait so long after it's been out. My main complaint with the film was that all of the characters felt like flat stereotypes to me -- except for Mark Ruffalo's character, Paul. Paul was, in many ways, the character with the most depth, whereas both Julianne Moore and Annette Bening's characters came of mostly as stereotypes of a lesbians (the exchange about the Joni Mitchell record is what did it for me). Bening's character comes off as a villain for much of the film, and Moore's character, while at first we feel sorry for her, she does ultimately betray her entire family.

Ultimately, this film to me felt like a missed opportunity. It's not uncommon for couples -- especially lesbian couples, since women's sexuality sometimes fluctuates over time (keep in mind I'm not saying this is true of all women) -- to begin to want and need different things sexually over the course of the relationship. After all, sexuality is complex and long-term relationships go through changes over time. The combination of those two things in the film's setup should have made for a fascinating means for delving into those ideas. But the way Moore's character went about that exploration, through betrayal rather than an open discussion with her partner, instead makes the show more like a traditional story about a family that goes through an affair.

The movie didn't quite do it for me. But it's still great to see a film about an LGBT family nominated for an Oscar.
Posted by Kay Steiger at 11:01 AM