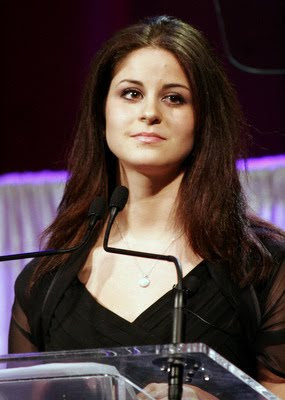 (Flickr/Pro-Life Unity)
Lila Rose is a 22-year-old planned anti-choice activist for the group Live Action, and she's been getting much attention for some recent videos that supposedly "expose" Planned Parenthood as an organization that will do nothing to stop human trafficking (presumably because they're so busy forcing abortions on women).

This particular anti-choice attack starts with a post on Big Government, Andrew Breitbart's most prominent site that has a history of posting videos that allege wrongdoing by progressive organizations but usually end up proven false, in which Rose posted a heavily edited video in which "undercover investigators" dressed up as a prostitute and a pimp (sound familiar?) enter a Planned Parenthood facility and ask for advice on sexual health. The implication of Rose's video is that Planned Parenthood is an evil organization that will help others in the exploitation of women. But after Rose's story broke, it was revealed that Planned Parenthood had a record of reporting the suspected traffickers to the FBI, which Rose's video alleges never happened.

Planned Parenthood may have a single staffer whose actions need to be called into question. And so, that staffer is being called to accounts. Other than that, Planned Parenthood is an organization that, if it catches a whiff of some illegal activity, gets the FBI involved as quickly as possible, even when they suspect that they are being subjected to a hoax.

Planned Parenthood released a statement that said, "Phyllis Kinsler, CEO of Planned Parenthood of Central New Jersey (PPCNJ), has stated that, ‘the behavior of our employee, as portrayed on the video, if accurate, violates PPCNJ policies, as well as our core values of protecting the welfare of minors and complying with the law, and appropriate action is being taken.’"
But what is important to understand is that Rose's video is part of a longstanding effort by anti-choice activists to defund Planned Parenthood. Because Planned Parenthood is the most well-known name among women for family planning and abortion services, anti-choice activists figure that shutting down the organization will somehow stop abortions (it won't).