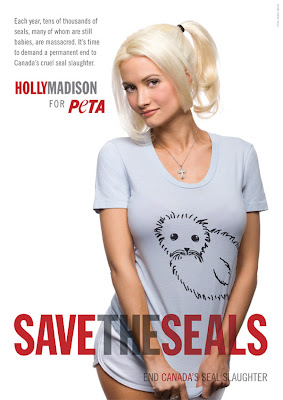 People who have read feminist blogs are aware that PETA sucks. Like, really sucks. Every so often, they release another marketing campaign that does some combination of the following:
This year's PETA ad they're trying to air during the Superbowl is no different. As Jill at Feministe pointed out, women are more likely to be vegetarian than men, so it's unclear why PETA is working so hard to alienate women.

It's no secret that PETA engages in these tactics because they hope to generate free press -- i.e. news articles about the controversy -- to get their name out because they, like other nonprofits have a limited budget. They probably pat themselves on the back when an ad campaign generates an enraged post on Feministing or Feministe. Still, I honestly tire of this debate. Maybe if they offered up reasonable alternatives to meat -- or approached adults as, well, adults, they'd have better traction to their message.

Honestly, ads like this make me want to help myself to a pork chop.
Posted by Kay Steiger at 4:14 PM

Seems to me the strategy here is clear: associate vegan/vegetarian diets with the same depictions of beauty already used to sell cosmetics and designer labels. We already have teenagers running around in Victoria's Secret Pajamas...

So I would say the totally cynical and straight-up evil answer from a PR firm would be something like:

These ads target young women at risk for developing an eating disorder in order to steer them towards a healthy diet.