Exceptions to Abortion Bans Are Near-Universal Bans in Practice 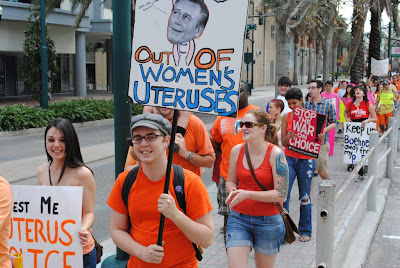 Today Nick Baumann of Mother Jones reports more on the disastrous anti-choice bill Congress is debating, HR 3, or the "No Taxpayer Funding for Abortion Act" introduced by Rep. Chris Smith (R-N.J.). See, since the legislation deals with how tax breaks can and can't be used (they can't be used for insurance that covers anything but forcible rape), it mostly means that they're making it much more invasive to apply tax law.

In some cases, the law would forbid using tax benefits—like credits or deductions—to pay for abortions or health insurance that covers abortion. If an American who used such a benefit were to be audited, Barthold said, the burden of proof would lie with the taxpayer to provide documentation, for example, that her abortion fell under the rape/incest/life-of-the-mother exception, or that the health insurance she had purchased did not cover abortions.

[Chair of the nonpartisan Joint Tax Committe Thomas] Barthold replied that the taxpayer would have to prove that she had complied with all applicable abortion laws. Under standard audit procedure, a woman would have to provide evidence to corroborate facts about abortions, rapes, and cases of incest, says Marcus Owens, an accountant and former longtime IRS official. If a taxpayer received a deduction or tax credit for abortion costs related to a case of rape or incest, or because her life was endangered, then "on audit [she] would have to demonstrate or prove, ideally by contemporaneous written documentation, that it was incest, or rape, or [her] life was in danger," Owens says. "It would be fairly intrusive for the woman."

In other words, it suddenly becomes the IRS' business whether your abortion was the "right" kind of abortion. If it wasn't here's hoping you saved your police report in which you reported your rape or a doctor's note to prove your life was actually in danger.
Banning abortion (or in this case, banning tax credits for abortion) is unpopular on its face because withholding them from victims of rape or incest or women whose lives are in danger seems cruel. The way to popularize this position is to add exceptions in which women are "victims" of the pregnancy. The idea, then, is that you're "punishing" women who seek elective abortions, presumably because they're sluts who should have just kept their legs closed (channeling Amanda Marcotte, there).
Adding exceptions for rape or incest sounds really good to moderates, but, as I argued before, in practice it simply restricts access to abortion for all women. Victims of rape or incest report these crimes to the police a very small percentage of the time. Especially sense the perpetrators of these crimes are most often known to the victims, it makes reporting them uncomfortable. (For those that doubt such a thing might occur, I highly recommend going back to listen to journalist David Holthouse's account on This American Life of how he came to terms decades later with getting raped in childhood by a family friend.) The "exceptions" route to abortion bans of any kind is simply a way of getting moderate people to support a radical policy.
The reality of HR 3, if passed, would lead to IRS agents asking uncomfortable questions of women about how, exactly, that tax credit was used. In many ways, it reminds me of some of the accounts in Before Roe v. Wade. Before the Supreme Court legalized abortion, women had to seek permission from her doctors in some states in hopes of obtaining a mental health exception to obtain a legal abortion. Women generally said that having a child (or another child) would be too difficult for them, often exaggerating or lying about depression. This lead to pro-choice activists saying they wanted "abortion on demand," not when a doctor said it was okay. Oddly, this phrase has been usurped by the anti-choice movement.
The reality is that it's difficult to apply abortion exceptions to abortion bans in practice, so even if conservatives say they only intend to target elective abortions, the reality is that victims of rape and incest and women whose lives are in danger will also be caught in this trap. But then, I suppose, that's probably the point.
Posted by Kay Steiger at 3:14 PM