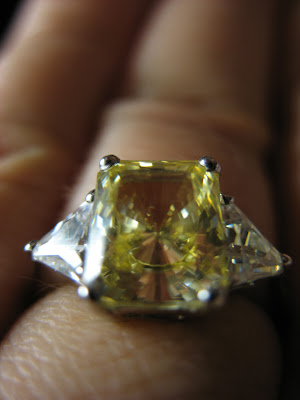 (Flickr/Maggiejumps)
The Hairpin ran this really great piece on what to say when your friends get engaged. I personally found it rather helpful because I tend to be really bad at shutting up after I say "congratulations" to my friends when they tell me they're getting married. For every eye roll that came with an announcement of upcoming nuptials, I apologize.
But. Here's the thing.
If the conversation about a wedding announcement went something like this:

and that was the end of the story, everything would be fantastic. It'd be like when your friends get a new job or an apartment or something.
Except it's generally considered rude to change the subject to talking about this week's basketball game or what you had for dinner yesterday. You're often expected to offer follow up questions that include—but aren't limited to—the following:

"Can I see the ring?" (I have virtually no opinions on rings or jewelry that costs more than $30, which probably means my only opinion is that you spent too much money on it.)
"Where/when will the wedding taking place?"
"Where are you going on your honeymoon?"
"Is your mom/dad acting really annoying about the whole thing?" (Most often, the answer seems to be yes.)
"What color are your bridesmaid dresses going to be?"
"Who are your bridesmaids going to be?" (It's really OK if I'm not one of them. Don't worry. I won't freak out.)
"What kind of cake will you get?"
"What's going to be your wedding favor?"
"Are you going to hand-address your invitations? My Aunt Edna said it's rude not to." (By the way, why do old people believe this? It's as if they really want you to waste a lot of time or pay someone else to waste a lot of time. They have computers now that address envelopes for you. Geez.)
"Do you have a tiny relative to carry rings or flowers to you during the ceremony?"

The answers to these questions are often not very concise. Which—I get it—this is totally the most important thing happening in the engaged couple's lives at the moment. But let's remember that weddings are becoming increasingly expensive, so therefore the pressure to dissect every single detail is, well, pretty strong. After all, these couples are blowing a lot of money on the Big Day.
But as a friend, I feel that my role should be limited to the following:

These all seem like totally acceptable ways to help a couple celebrate their One Special Day. Until then, however, I'd rather talk about television or sports or really anything other than what flavor your cake frosting is going to be. Seriously people, just let me be surprised.
The reason folks who get engaged might be experiencing some, uh, somewhat less than glowing congratulatory statements might be because a lot of people have really complicated feelings about weddings. And that might be hard for some people because friends are expected to care a lot about the details of these things.
Granted, this doesn't include everyone. I also have friends that keep wedding talk to a minimum. To those, I thank you. And hey, I'm not trying to be mean. Like I said, engaged folks should know that their friends really are happy for them. It's just that said friends maybe don't want to talk about the wedding as much as the engaged folks tend to think about it.
So let me make a deal: If we all agree to abide by the rules presented in The Hairpin piece, maybe that means the engaged can spare us some of details about the wedding. That's all I ask.
Posted by Kay Steiger at 3:13 PM

I find this advice extremely useful. I generally only say something like "cool" and then just ride out the awkwardness.