What Will It Take To Make a Consistent Sexual Assault Policy on Campuses Nationwide? 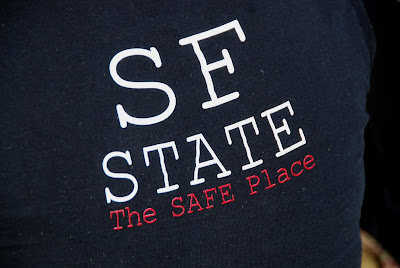 T-shirts San Francisco Women Against Rape created for a 2009 Walk Against Rape. (Flickr/Steve Rhodes)
Today the Chronicle of Higher Education has a really excellent piece on the current debate over sexual assault policies on campus. (Unfortunately, the story is behind a paywall, but I'll discuss some of the relevant bits below and for further context, you should read this really great series from the Center for Public Integrity on the problems with many campus sexual assault policies.)
It seems that whether a victim will receive justice for her assault (the vast majority of victims are women, though they aren't the only ones) depends greatly on where she attends school. Part of this stems from confusion over the law itself:

Federal civil-rights law requires [colleges and universities] to resolve all reported of­fenses. And increasingly, public pressure bears down just as powerfully. [...] The watchdog group Security on Campus proposed broader federal legislation, even a requirement that colleges use the relatively low standard of evidence "more likely than not." And at Dickinson College this month, students occupied an administration building and demanded that expulsion be the only available penalty for rape.

What this ultimately reveals is that sexual assault policies vary widely by campus, depending on university policy, interpretation of the law, and campus culture. These factors all leave a great deal of sexual assault policy up to the discretion of individuals. Though it's sometimes helpful to have room for special circumstances—especially since rape cases sometimes are thin on provable evidence—but ultimately what campuses need is a consistent best practices approach to dealing with sexual assault.
And figuring out what such a policy might be is difficult. The Chronicle article points out:

For cases that are reported, single sanctions may decrease findings of responsibility. "If the hearing panel has any doubt at all, they're going to acquit," says Gary M. Pavela, a consultant to colleges on legal issues and a former director of student judicial programs at the University of Maryland at College Park. Technical explanations of standards of evi­dence don't matter, he says: "Your eyes glaze over and you do ulti­mately what you think is right."

Finding a balance between investigating cases fairly and providing strong support for potential victims is tricky, but, as Dickson college found, being precise and providing a range of offenses as well as clear definitions is helpful. The school was awarded a $300,000 federal grant administered by the Department of Justice designed to encourage individual institutions to implement a comprehensive and fair sexual assault policy on campuses for its implementation of mandatory prevention education programs.
The grant program is a good incentive, but it also means that schools that already care about this problem are the ones most likely to be the leaders on creating good sexual assault policies. Until best practices can be agreed upon, many victims will simply exist in a legal limbo until schools can figure out what to do with them.
The Center for Public Integrity report revealed that sexual assault victims they followed were sometimes more likely to drop out of school than their assailants were to be suspended while they waited to pursue university appeals processes. For the sake of these young people, here's hoping schools will adopt a precise, fair, and universal sexual assault policy.
Posted by Kay Steiger at 10:34 AM