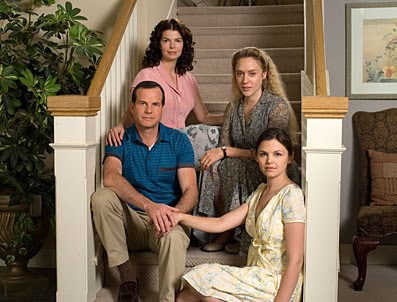 If you watched the series finale of Big Love last night and if you're not ready to give up on Big Love, be sure to read my piece that ran in The Atlantic over the weekend in anticipation of the finale:

The hallmark of Big Love is its ability to dive into modern social issues that are seemingly beyond the scope of the Utah polygamist family at its center. One of the show's creators said on a HBO featurette about the series, "There was something almost a little bit retro, you know, '50s American suburban family about the Henricksons and I think we were turning that idea on its head a little bit."

Spoilers ahead with some final brief thoughts on the finale.

The series ended more or less with the same themes they'd established throughout the show. I thought the way they did away with Bill's character was a bit cheap, but it seemed obvious that Bill couldn't continue in his role as the patriarch of the family. This whole season demonstrated that he was slowly losing control over the life he had built for himself. Eventually everything gradually slipped away -- the casino, the state senate seat, Home Plus, his wives, and finally his life. Each of the women began to express desires for something beyond the family (which I talk about in my Atlantic piece).
I agree with Aileen at Vulture, in that Nicki clearly had the least satisfactory resolution. Though I really loved many of her lines in the series, she was by far the least complex character, often reduced to a stereotype of the bitchy, jealous wife.
Still, the final message of the show really did demonstrate the show's major theme: that the bond between the sister wives is strong. They things they'd been through together would bring them together for life, even as they start down their diverging paths.
Posted by Kay Steiger at 10:01 AM