Girls Just Wanna Have Guns. Then All the Rape Will Stop, Right? 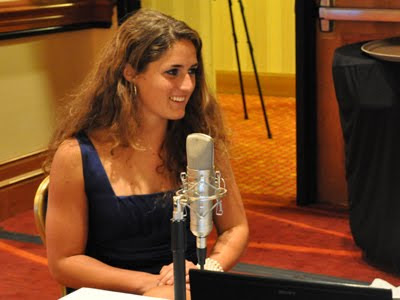 (Breitbart)
Remember Hannah Giles? Well, her sister, Regis Giles, is getting a new show about her shooting guns. Also, apparently she doesn't believe men and women should be equal. Read my interview with her on Campus Progress from when I tracked her down at CPAC last week.

Regis Giles, who spoke on the student activism panel at the Conservative Political Action Conference Friday, comes from a family of conserative activists. You've most likely heard of her sister, Hannah Giles, who partnered with James O'Keefe in videos that helped bring down ACORN. Her father, Doug Giles, is the host of Clash Radio and spokesperson for "family values." But Regis is branching out on her own, with a new television show in the works called "Primal Urge" in the works on the Pursuit Channel. Campus Progress caught up with Regis to talk aobut her current project, GirlsJustWannaHaveGuns.com, her upcoming television show, and why she doesn't identify as a feminist.

Tell me a little bit about your website [Girlsjustwannahaveguns.com].

My website has my logo on it. In my speech you know, it's also, my company's main objective is self defense. You've seen in the news where women have been jumped and you see the security cameras where they can't do anything. You see them shoved in their cars, ducking down. If they had a gun on them. That would've been a little bit different. If they would've had a gun on them, their life would've been a lot different. They wouldn't have that horrible experience of actually being raped or abducted or even killed. That's what my company stands for.